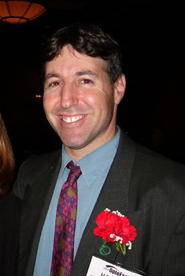 Richman, who currently serves as president-elect for the NJSOP, has been active in organized optometry prior to his graduation from New England College of Optometry in 1991.  He was the class vice president and the student liaison to the College of Optometrists in Vision Development.  He has been a member of the NJSOP for 16 years and serves on many committees for the 700-member organization.

The Optometrist of the Year Award is presented to an optometrist who, during the preceding 18-24 months, has proven himself or herself to be an outstanding practitioner.  In order to qualify for the award, a candidate must demonstrate a mode of practice that shows deep commitment to his or her patients.  In addition, the optometrist must have shown concern and involvement within the association and the profession and made a significant contribution to the community.

Richman's peers chose him for the award in grateful recognition of his invaluable contributions to the visual welfare of the community, the association, the profession of optometry and the State of New Jersey. The NJSOP recognizes Dr. Richman for being an authority on low vision rehabilitation and for sharing his wealth of knowledge on the subject with the public and optometric community.

During this past year, Richman has become the resident expert on the Physician Quality Reporting Initiative (PQRI).  He has generously shared his expertise with the membership in numerous forms, including authoring newsletter articles, listserve postings and presenting free members-only seminars on PQRI, examining Visually Impaired patients and evaluating infants in conjunction with the AOA InfantSee program.

Richman is a member of the American Optometric Association, in which he serves on the Eyecare Benefits Center Committee and as Chair of the Low Vision Section in New Jersey.   Additionally, Richman is the liaison between NJSOP and the New Jersey Commission for the Blind and Visually Impaired.

"As a proud member of the NJSOP, I realize the positive impact our organization has had on the public, and how it has assisted our members' efforts to better serve the eyecare needs of New Jersey's citizens," Richman said.  "I'm truly honored to accept such a prestigious award from my NJSOP colleagues and to be recognized in this way."

We will be moving shortly to 161 Main Street. We are still currently seeing patients at 136 Main.