LASIK (Laser-Assisted-In-Situ Keratomileusis) is currently one of the most frequently performed elective procedures in North America. It is a highly effective outpatient procedure that is suitable for most low, moderate and higher prescriptions. LASIK uses a cool beam of light from the excimer laser to gently reshape the front surface (cornea) of your eye. 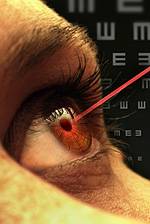 As Medical Director of TLC North Jersey, Dr. Fox continues to stand apart as one of the most accomplished corneal and refractive surgeons in the Greater Metropolitan area. He has performed over 20,000 refractive surgical procedures since 1996 and continues to excel as a leader and authority in the field as a clinician, teacher and patient advocate.

Education/Training
Dr. Fox was a Merit Society Scholar and Honors graduate of Colgate University. He received his medical degree from Hahnemann Medical College where he was elected to the Alpha Omega Alpha Medical Honor Society. Following a residency in Ophthalmology at Boston University Medical Center, Dr. Fox completed his training with a fellowship in Corneal and Refractive surgery at New York Eye and Ear Infirmary. He is a Fellow of the American Academy of Ophthalmology, the American College of Surgeons and the New York Academy of Medicine.

Achievements
Dr. Fox is a clinical instructor in corneal transplantation surgery at New York Eye and Ear Infirmary and is a frequent lecturer on topics in Refractive surgery at the national meetings of the American Academy of Ophthalmology and the American Society of Cataract and Refractive Surgery. He was most recently invited to speak on topics in laser vision correction at the International Medical Advisory Board meeting of Optical Express in Glasgow Scotland. In addition to authoring several notable scientific papers on laser vision correction, he has designed instrumentation used during procedures to improve clinical outcomes. Dr. Fox has been a pioneer in the introduction of new technologies in vision correction to the metropolitan area including Intacs corneal implants for patients with keratoconus and ICL surgery (intra ocular contact lenses) for those individuals with prescriptions out of range for conventional laser surgery.

In addition to multiple citations in the print media including Elle and Town and Country Magazine, Dr. Fox has made frequent appearances on ABC television's "The View" and "Good Morning America" and was most recently been featured on the CBS Evening News as a national expert in LASIK surgery. He has been selected as one of the areas best Refractive surgeons by New York Magazine and the Castle Connelly guide.